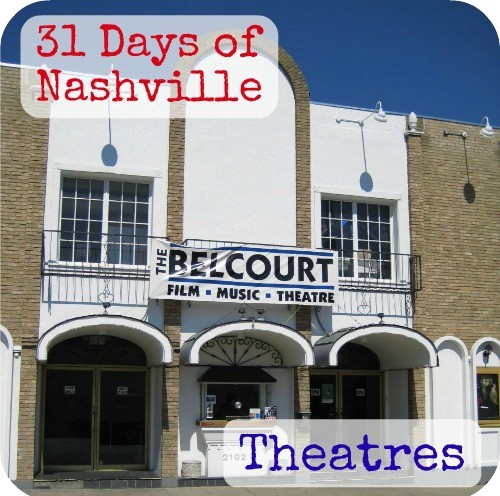 Nashville is home to numerous theatres (and theaters), both performing arts and the big screen. The majority of our big screen theaters are fairly standard like you’ll find in most cities where you can catch Hollywood’s latest film, so I would like to introduce you to a few alternatives in the Nashville area.

The Belcourt Theatre is in the heart of Hillsboro Village and has been through several changes and renovations since it opened in 1925. The Belcourt is a “nonprofit cultural institution dedicated to presenting the best of independent, documentary, world, repertory and classic cinema.”* The Belcourt is where you go to see the annual showing of It’s A Wonderful Life every year in December, as well as Hitchcock movies at least once a year. It’s also where you go for smaller films that the large theaters aren’t carrying. The venue can also be rented for concerts for musicians. You can also catch films that are part of the Sundance Film Festival every year. October 31-November 2, The Rocky Horror Picture Show is playing as part of their Midnight Movies event.

In the small town near Old Hickory where locals know not to speed, The Lakewood Theatre Co has held performances since 1983. The theatre is small enough so that you really feel part of the production you’re watching. My mom and I have been season ticket holders several years in the past, and it was well worth the commitment. When my brother was younger, he was part of their summer workshop for kids and participated in a few plays after that. The theatre company just wrapped up their production of The Beverly Hillbillies last week, and their next production of Charlotte’s Web (which happens to be my most favorite childhood book) runs from November 29th to December 15th.

I have so many great memories of going to the Nashville Children’s Theatre during school field trips in elementary school. My friend, Liberty, with the awesome memory can probably remember all of the plays we saw there, but I’m pretty sure that I remember seeing Charlotte’s Web and The Lion, the Witch and the Wardrobe there. I am pretty sure that my love of live theatre began all those years ago. I took my Little Sister there a couple of years ago to see a juggling performance, and the place had changed quite a bit from what I remember as a child, but it’s still an awesome venue to introduce children to the wonderful imagination behind acting. If you’re a child of the 70’s and 80’s, you’ll probably enjoy their current production of Schoolhouse Rock.

The Tennessee Performing Arts Center (aka TPAC) is home to Nashville’s larger theatres where you can see Broadway shows and other popular performing arts. The Nashville Ballet, Nashville Opera and Teneessee Repertory Theatre also perform at TPAC. I have seen countless productions at TPAC over the years and love getting dressed up to see a performance downtown…you know, like an adult. Just to name a few, I’ve seen Cats, Miss Saigon, Annie (my favorite!), Wicked and To Kill a Mockingbird at TPAC, and they have all been awesome productions. The Nutcracker is performed most every year around Christmas, and it looks like another favorite of mine, A Christmas Story, will be playing from November 29th to December 22nd.